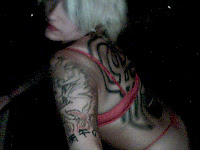 Work spares us from three evils: boredom, vice, and need. -Voltaire
Except in my case... the vice is encouraged! - Mia

Today I celebrate a year at Niteflirt. The word anniversary lacks the exact feeling of this day for me. What i feel is more like reaching a goal, hitting a milestone, or better yet, discovering a treasured item on a quest. I don't mean to make working in phone sex to sound more lofty than it is... but for me, this year has brought a lot of self discovery. These discoveries come from many different levels, my own self awareness, my knowledge, my experiences, even my own confidence has grown.
Perhaps i need to back up and give you a little background. I hesitate to get very personal in my blogs... other than from a sexual perspective, but i am thinking now is the time to let you all in a bit. I am what i am, and that is a very sexual person. Some people have really appreciated that about me... and others seemed a little scared of my overtness. Either way, this side of me has bloomed or wilted depending on my situation in life. Of course in college, with new found freedom and lots of partying, i awoke. Then after college i found myself in a loveless marriage, and my soul suffered. My husband was not a sexual person, the marriage was a disaster. He responded to my sexuality with anger and fear, he attempted to repress it within me. I spent a lot of time with my girlfriends, which he saw as innocent, but in reality much of that time was spent between each others thighs. Happily free from that marriage, i continued on my journey of sexual awakening and this is when i discovered the world of BDSM. But because of my education (a double major, one of which was Women's Studies), admitting to my submissive desires made me feel like a traitor to my gender. I kept my kinks hidden and private but continued to explore that world with trusted and discrete partners. By day, though, my youth behind me, a more serious, industrious, professional Mia was forefront. Most of those around me were clueless about the extent of my desires, other than giving them a glimpse of the darker side of me from time to time when certain kinky subjects would come up in conversation, and i happened to know all about them. I remember i used to watch those HBO sex specials and they'd interview people who cammed, or people who worked in sex positive adult industries, developing sex toys or making fetish wear would be interviewed always made me feel like i was missing my calling.
So a year ago, i made the leap toward Niteflirt. Sure the first few months were a huge struggle.. i have never even had phone sex before, i was never a stripper, all i was was a woman who "did things". Luckily, early on i got some calls from people who knew how to draw out the side of me that ended up flourishing in this environment. (Thank You!) Six months into it, i got brave enough to cam... me, who had "skills" but always sort of thought of myself as unique but not beautiful. Camming and the positive response that has brought from so many has really made me have a much more healthy and affirmative view of myself and of aging. Our society doesn't, as a rule, make women feel too good about their bodies and appearance after they leave their twenties... But camming at Niteflirt has truly done that for me!
So, in case there are any doubts, i love doing what i do at Niteflirt. I love playing with each and every one of you and appreciate the time and resources you have diverted toward me. But i also want to thank each of you who have spent time with me on the phone for the opportunity to explore my own desires, for the encouraging words you've shared and for helping me to take myself even further into my sexual awakening!