Meeting Him - a fantasy 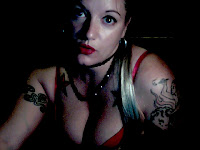 I received a card in the mail. An invitation. On one side it had one of those black and white art photos, the other side of the postcard had the date and time and that sort of information. It was an art opening. Handwritten in very masculine block letters were the words "come slut". I smiled to myself. I imagined his voice saying those words. I found my breath increasing. I was torn, should I or shouldn't I. This voice was familiar to me, but I had never met this man. He had spoken to me numerous times, and his tone, his vocal strength, his ability to control me with words was unparalleled. Gentle but firm, with his experience and intelligence he employed both humor and passion and he tapped into an ache deep inside me.

The day arrived and I fluctuated back and forth trying decide if I should go. That evening i found myself in the shower, taking care to shave my pussy as if preparing for a date. My fingertips squeezed my nipples as I finally decided, yes I am going to that opening tonight. I cut the tags off a super sexy black and red satin bra and thong set that I had purchased the week before and slipped it on. I picked a classic but sexy, simple but low cut black dress and heels that had a touch of kink just below the surface. With a spritz of perfume on the back of my neck, i glanced at myself in the mirror and wondered.. would it please him?

I pulled open the gallery's heavy glass door and stepped into a busy and noisy artsy scene. I looked around the room. Now I had to figure out which one he was. I had no idea how to handle the situation, would he approach me, would wait for me to figure it out, would he toy with me? I knew the answer right away.. he would make me suffer. He would absolutely play games with me, he would stand back and watch me struggle and twist. I moved to the bar and ordered a glass of Shiraz and began the search. I knew very little about his appearance, but i knew enough about how he thought that I looked for signs in the men's behaviors.
He was strong and driven. Men who came off as weak were quickly ruled out. I also ruled out all the men who were obviously attached. Then I ruled out those men who were of the wrong age. Then I began looking for eye contact. I knew he would be watching me. I found strength in wine... and soon found myself finishing off my third glass. My face was flushed, I was frustrated, new men arrived while others left. I continued making the rounds of the room, looking into the men's faces.
Finally I went to the powder room, and sat in a vintage velvet chair in one corner, trying to decide how to proceed. Finally I grabbed my bag and headed back through the crowd toward the door. The artist whose exhibit it was, stood by himself near the door. Before leaving I felt I should say something to him about the exhibit before walking out the door. I smiled and began telling him how fond I was of one of the pieces toward the back wall. He proceeded to tell me about the inspiration behind the work, something about his travels in Bolivia. I could barely hear his words, my mind was foggy and I felt so disappointed. Then, within his dialog I hear the name Jon...
I tuned back into the artist and tried to make sense of what he was telling me. The photograph I was complimenting... a favorite of his friend Jon. I asked him to clarify... was it the one I was referring to, on the back wall? The artist and I begin to stroll back to the photograph, as he tells me that he wasn't even going to include this picture in the show, but his friend Jon insisted... We stood before it and gazed... the frame included the back of a woman in close up, her right shoulder and her hair falling down the porcelain of her back. Her face was not visible. But a mans hand griped the back of her neck. The artist asked me.. " you are really fond of it?" I stared at it and contemplated. I saw the tension in the fingertips of the man's hand. I saw the slight indentation of his pressure into the tender flesh of her shoulder. I stared quietly. Then I turned to the artist and said... "yes, i like it. I like it very much. There is clearly a power exchange behind the image." He smiled at me.
"Well that shows how much I know, I felt nothing regarding this photo. I thought it was meaningless. I couldn't even give it a title". "Really?" I inquired, "it seems so full of meaning to me". I took a step forward to read the title plate just below the right lower corner of the frame. My eyes widened as I heard the artist say, "yeah, in fact, I wanted to call it "Untitled 7", my friend Jon had to give it a title. I read the word "mia".
I felt hot, even feverish. I wanted to sit down. I felt like a small part of a big play. I was a pawn of sorts. I felt like i had no control over my own life. I'm wanted to give in to the wave that was pulling me out toward the vast ocean but i also felt an intense need to tightly grip all i knew and held familiar. The artist looked into my face and asked if i was ok. I told him perhaps I had one too many glasses of wine. I took a step backwards and plopped onto a divan. In a far away voice I heard the artist said "awwww - there he is." My mind reeled. I found myself outside my body as i watched the artist shake the hand of a man.
He stood over me as i sat on the divan, my knees pressed tightly together. The artist, taking to his friend, began retelling the events of the last few minutes.... Me approaching him to compliment the photo, us walking back to the photo, him telling me of the naming of the piece... The stranger turned toward me and said "it's for you mia... I've purchased it as a gift for you, my sweet slut...."

I don't know if this real or one of you stories, but I like it! Your responses to the situation are making me dizzy.....