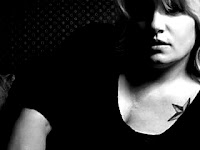 This is a topic I have to readdress time and time again. I think that for some it must be very hard to put your head around because of their own limited experiences. It says on my Niteflirt page...

Challenge me with your Roleplay.

Let me hear your twisted Fantasy.

Now to me this seems makes perfect sense. Sometimes I feel like a sponge, ready to respond to whatever I am faced with. What this means sexually is that I find myself responding to the other(s) whom I share sexual experiences with. That doesn't mean I am always compatible with every person out there, but what it means is that if our sexual energy is a match, my body, mind and emotions react. Sometimes it only takes a person's tone of voice or their body language to cue my responses. It's not something I think a lot about, it just sort of happens. I find myself intuitively responding to others. Of course there are those whose personalities I just plain don't like. For instance, cocky and arrogant mixed with disrespectful and selfish, is not a person I want to know. I actually know a guy like that, and he calls himself submissive. I call him passive aggressive. Trying to engage in D/s with him is like going into rural Mississippi and trying to get a cup of Earl Grey with milk and turbinado sugar. I have tried that by the way, it's futile. It's not that I couldn't dominate this guy, but to what ends? I am at a certain age where I simply do not want to bother with people who can't see past their own nose (cock) or people who want to try and make themselves feel important at the expense of others. And especially when I can fulfill my own needs to Dominate by playing with men who know how to treat me like a Goddess. I am not mean spirited, I am not a Sadist, I am not a user. What I enjoy as a Top is feeling treasured, having bottoms who want to please and worship. I want to be with submissive people who need my firm hand and gentle guidance to fulfill their deepest desires. I want to be the sweet seductive voice in their ear and they find themselves on the brink of bliss over and over again.

Questions about my diverse sexual interests? Check out my recordings and short stories available through Niteflirt. I have a very hot story about having a stranger sneak into my bedroom one night with his hand over my mouth, fills me in unexpected ways. I have another story that guides my reader through forced face sitting. I have recording, made live of my mouth being used deep and hard with lots of choking. I even have tiny dick humiliation and cuckold stories. All of my recordings and stories are rated five stars and have tons of feedback from listeners/readers raving about their creativity, authenticity or just plain old hotness. And because you have taken the time to read this far into my blog, here is a little sample…

“Dear?” The husband called to his wife through the bathroom door. She was dressing; earlier in the day he had told her he had special plans for her birthday. She opened the door and he smelled the lavender of her perfume. She had on a clingy black shirt dress that buttoned down the front, the top three buttons open and her cleavage rose up and offered it to his eyes. Even after all the years, the image of her curvy body displayed in clingy fabrics made his cock begin to rise. She sat at the end of the bed with her stockings in one hand and leaned forward and began rolling one up her leg… “Tom did you have something you wanted to tell me?” His eyes enjoyed the visual feast of her careful and conscious preparation of her body. He stammered a bit trying to find the right words…”well dear…I wanted to do something special for you, this is an important birthday.” She smiled warmly up at him and she lifted the hem of her dress and attached the top of her stockings to her garters. He watched her, his arousal increasing and continued…” I made some arrangements, um… I have been trying to set something special up for you... and um… well…” He lowered his eyes, landing on the vintage styled five inch pumps she was slipping on her perfect little feet. His cock was not only fully erect in his pants but beginning to leak a little pre-cum now. She leaned back on the bed, her stocking clad legs stretched out before him. “Go on Tom”.

Tom had placed an ad in the college paper two months before. He wanted to find just the right type. He wanted to give her a very special gift. Most of the responses’ he received were far from ideal. Tom and his wife had talked about this during their love making time and time again. Each time he quaked with thunderous orgasms as she described to him just how it would be…

Of course their is more to this story, much more. If you want to read it, click here.

Just to hit the point home, I have started working on another story, this one is about having a boyfriend take me to hotel room and hand me over to a group of men he knows and tell me "Be a good girl."

Hope you enjoy my wicked mind.