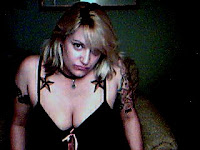 I listened to the story he was telling me and I laughed and smiled quietly to myself. The way he treated those women, the way he knew just how to take them to the edge and leave them there… His dominant skills were undeniable. I never much gave into men’s claims that they were Dominant or that they knew how to treat a sub. I doubted them, anyone who had to claim those things, I believed, didn’t really possess them. But this man was quite the opposite; he always claimed he was still learning. But when He told me that night about what he had done – all my doubts were washed away. I found myself slipping silently into that delicious hypnotic place as I imagined his hands touching me in the way he described. I closed my eyes and my hand slipped into my panties as I put myself in her place in his story, feeling my face pressed into the pillow muffling a cry as his hand met, over and over with the flesh of my backside. How badly I ached for his body pressed against mine as he insistently took what I knew was already his… me.