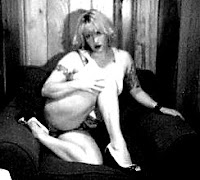 About three weeks after my conversation with S he sent me an email telling me about his friend M. M had got in on the ground floor of the technology boom and made all his money in one fell swoop during a merger or sale in the late 80’s. Since then he had been retired. He had met his wife years earlier at the jersey shore. He went every weekend to sail. She was a fun loving, jersey shore Italian girl. They courted by sailing during the day and partying and dancing at loud shore clubs until the wee hours of the night. Most of all they fucked, it was dirty sweaty animal fucking. They had a whirl wind relationship and it wasn’t until just before they married that his jersey shore girl realized just how much M was worth. Immediately after marrying she became a high maintenance bitch. She spent his money trying to leave behind her humble beginnings. She joined Garden Clubs and started playing tennis. She bought designer clothing and after they had kids, insisted on snooty private schools. And she began withholding sex. His fun loving jersey shore slut was gone.

M had a son who went on to become a chef, spending time training in France and Napa valley. During M’s retirement, he set his son up in a restaurant in this quiet little hamlet town on the border of New Jersey and Pennsylvania. It had become a destination spot for New Yorkers and those from Philly. M spent most of his evenings at the restaurant assisting his son. S suggested I stop by and say hi.

The place was perfect. Obviously designers were involved in every aspect of its set up. It was both friendly and private. It was family style and romantic. It has fussy complicated foody dishes and quality comfort foods. I understood why it was a popular restaurant. After the dinner crowd thinned my girl friend and I were approached by a tall thin tan fit man. It had to be him. I introduced myself and a look of recognition swept across his face. He gave my hand a squeeze and smiled warmly. He brought a bottle of champagne from the bar and sat with us. We closed the restaurant laughing about youthful adventures at the jersey shore. He asked for my number before we left.

M called the two nights later, after the restaurant closed. It’s was 2 am. He sent a car to pick me up. That gave me just enough time to prepare. I already had figured it out. I arrived at his house in tight skinny jeans, and tall fuck me pumps, a push up bra and a tight tank top. My make up was heavy black eye liner, ala Sophia Loren and bright red lips. The car pulled up into an underground garage and I rode up an elevator to his loft. He was pleased as he opened the door.

A knowing grin slipped across his lips. He handed me a shot of tequila. We drank two shots each and he turned on music to a thumping beat. He obviously didn’t have neighbors who would complain. Then with salty lips and the sharp taste of tequila on our tongues we kissed a deep hard wet kiss. He pulled me to his body and ground his pelvis against me. He really knew how to kiss. His hands were all over me, exploring quickly, squeezing and pawing my curves. His mouth moved to my neck as his hands groped my ass. He bit my neck as he lifted me up and I swung my legs around his hips. Both of us had jeans on but I felt the heat between us as our crotches crushed against each other.
He carried me to the kitchen counter, setting my ass on it and without our crotches separating he poured us two more shots. Then facing me and his hard bulge pressing into my soft moist mound he helped me out of my shirt. He pulled the turquoise strap of my bra down over my shoulder and freed my left tit. Then he lowered his face, closed his eyes and began nibbling, sucking and biting me. I arched my back, letting my head loll and let him devour my breasts. My pussy was aching. This strong handsome powerful man was having me, I felt under his spell. I laid down on his counter and he reached under me and took off my bra, he suckled and chewed my nipples until they were aching little nubs. I wanted more. He began moving his mouth down my soft belly flesh and I raised my hips encouraging him. He unbuckled my belt and unzipped my jeans; I raised my hips to allow him to peel my jeans off. I wore a turquoise g-string under my jeans… looking down at it he said “nice but it’s got to go”. My heels and jeans hit the floor as he hooked his thumbs under the string at both sides of my hips, I opened my legs and before he could tug the panties down he saw the damp stain in the crotch of my panties. He leaned his face into me pressing his nose against me and inhaled deeply. He instantly changed his mind, instead of taking them off, he just pulled them to one side and looked at me. This is a trigger for me. I love love love a man to admire my pussy. And he did, he lightly touched the meaty lips, positioning them and tickling the folds of swollen flesh. I was on fire. I felt his warm breath nearing me and I thought I was going to cum right then. He kissed my clit and wrapped my legs around his shoulders. His tongue reached out and he lapped me from taint to clit. I shivered everywhere.
Suddenly he gripped my hips and spun me on that slick surface around, then pulled my shoulders toward him so that my head was hanging over the end of the counter. I opened my mouth and inched toward the distended front of his jeans. I reached, like an impatient child, tugging and pulling at his pants. He deftly released his cock from its confines and presented it to my mouth. I was hungry. I took his cock and made a meal of it. I slurped and sucked, hollowing my cheeks as I took him deeper and deeper. He pumped his hips and began fucking my face, holding it deep so that he could feel my throat constrict and my gag coat his cock in saliva. He leaned over my body and reaching between my wide open legs he spanked my clit as I drool oozed from my lips. I moaned on his cock, and gasping for breath between thrusts I began begging for him to fuck me. Before I could finish my request his cock was plunged back into my slimy mouth hole and he would ask, “what?” Over and over he teased me this way. I opened my legs as wide as I could and humped the air, my body aching for something to enter me. Finally he pulled his saliva soaked cock out of my mouth and said “let me see you.”
I got up and followed him into the well lit living room, and standing in front of a bank of windows overlooking a twinkling city I caught my reflection in the mirror across the room. My make up was streaked down my cheeks; my hair was wild like a mane around my head. Streaks of shiny drool dribbled off my chin and tears had destroyed my eye make-up. “You’re fucking gorgeous” is all M said before pulling me over to the couch, peeling off my soaked panties and guiding me to my hands and knees. His dick inside me felt like a child’s Christmas morning. I was cumming all over his cock as he thrust hard and deep into my belly. He did not stop or slow even as I screamed into the pillows of his sofa. His shaft jabbed up and into my Gspot over and over. The juices were oozing around him and the wet slapping sound of his balls against my clit could be heard over the pulsations of the music. He grunted and pulled his cock out of my cummy pussy and I swung my head around to catch his seed on my tongue. His face was a snarl as he grunted cum into my mouth. I held his cum on my tongue, swirled it around in my mouth and blew a bubble with it before swallowing it. “Damn you’re a hot slut.”