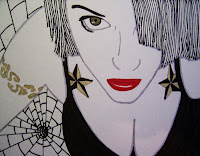 The fourth man in the group was R. From the photos he sent me, R was a smaller man who was, frankly, quite nerdy. We had little to talk about when he first called me, it was awkward. In every picture he sent me it was him posing with family, he had blurred out the family members. I noticed this right away. It was like he had no identity outside of his role as father/husband/son. But he never mentioned his family or wife. The topic we finally discussed was literature. As expected we did not share similar tastes, or perhaps our worlds were just so different that bringing the gap, even in our preferred pleasure reading material, was going to be a challenge. I finally called S to ask his advice. R laughed heartily after I made the statement “This guy knows nothing about the world I am from; I doubt we will ever make a connection!” He asked me what we have tried talking about and I told him fiction. I said “R has some authors he has suggested I check out, it’s this extreme sci-fi stuff, I am not sure I can get through it.”

“Did you suggest anything for him?”

He laughed again. “Give him the titles of some erotica you like.” So I did.

A week after I sent him my list he wanted to meet. I drove up to a Courtyard about 20 minutes from where I live. Not sure what to wear I figured that the best bet was to just be me. It was warm that early spring day so I wore cut off jeans, boots and a tight black tee-shirt. We met in the lobby and he gave me a formal handshake. His eyes began darting excitedly up and down my body, but he quickly corrected himself. He was not as mousey and nerdy as he appeared in his pictures. He had on sporty Patagonia clothing and hiking sandals. He was small but not squatty or disproportioned, he looked fairly fit and although he was balding, he handled it well by keeping his hair short. He had lovely light blue eyes.

He stood and left a room key on the coffee table between us. He stood to leave, gave me a hand shake and walked out of the building. He made me laugh. He treated our rendezvous like we were characters in some type of spy novel. This man R was definitely sexually repressed. I walked down the hallway toward the room number and pledged to break this man out of his sexual shackles. I went directly in the room and waited. In five minutes he entered. He brought in a bag with a bottle of wine. It was a nice Italian wine, just the kind I prefer. He admitted that S had helped him pick it out for me. He blushed and it endeared him to me. I liked him. He was cute.

His hands were plastered at his sides and his whole body was stiff as I stood up and smiled at him. I started with a slow seductive strip tease. He stared like a deer caught in headlights as I flipped my hair, turned around and swayed my hips to silent music. I closed my eyes and let my hands wander up and down my torso, cupping my breasts and gripping the front of my jean shorts. When I opened my eyes he was transfixed and there was a growing stain in the front of his khaki’s. His hands were still frozen to his sides. I asked him “Is this what you wanted?” His voice came out at a croak but it was an enthusiastic croak “Oh yes!”

He was shy. He stood and turned away from me. I walked over and poured another glass of wine attempting to give him his privacy. When I turned back he was under the sheets still wearing his shirt. I glanced down have expected not to see his shoes, but there were there piled neatly by his folded pants. His right hand was hidden under the covers and his left was still plastered to his side. I began my striptease again.

I rocked my shoulder and kept my eyes locked on his as my hand began toying with the hem of my shirt. I raised it slowly so he could see the smooth bare expanse of my belly. I turned away from him bending forward and swaying my ass as I began raising my shirt.

“I love your tattoos Mia. I have thought about you showing them to me just like this…”

I turned my upper torso toward him. His hand was now visibly moving under the covers. I pulled my tee shirt the rest of the way over my head and tossed it over the chair. I wore a red and black push up bra. My tits were full and voluptuous behind the satiny fabric. Wearing nothing but the bra and cut off short and knee high boots I hooked my thumbs behind the snap of my jeans and popped it open. He gasped. I grinned at him “Might want to slow down there R, make it last…” He did exactly what I asked. His hands fell to his side. His cock was outlined by the sheet. I was curious by what I saw. He saw me looking at him and pulled his leg up to hide his bulge. I soothed him with my voice, telling him to relax and enjoy himself. I reached forward and tugged at the sheet. He sat paralyzed as the fabric moved down his hips to finally reveal the tip of his cock. I left it there. I was enjoying his discomfort.

I leaned forward, letting my full breasts spill forward toward where he lay paralyzed. His cock flexed as I reached behind my back to unclasp. I let my bra fall and I continued undulating. My nipples stiffened instantly as swayed. I reached up and let them rest in both palms, my fingertips reaching to my nipples and twisting them between fingers. I let my head fall back and enjoyed the pinches. I always enjoy a bit of rough nipple play. I smiled again as he sat rapt in the bed. His cock was straining under the covers, a shiny tip peaking out at me. He was open mouthed as he stared at my breasts. If he hadn’t initially specifically asked me just to masturbate for him I would have brought my breast to his mouth. But I was enjoying teasing him immensely. He was beyond aroused. It was like showing off for a teenaged virgin. I was half way expecting him to spew all over his belly at any second and my shorts hadn’t even come off yet.

I began wiggling out of my cut offs. I nodded at him as his hand began creeping back to his erection.

“Yes R, I am making myself feel so good right now… join me.”

I stepped out of the jeans clumped at my feet and sat on the edge of the arm chair, wearing only red and black thong. I pulled my boots off. He raised himself on the bed, to get a better view of me, shoving a couple of pillows behind his back. The armchair swiveled so turned toward him and with my knees pressed tightly together I rubbed my hand against my crotch. I laid my head against the back of the chair. Moaning softly and letting my hand work its magic, my clit throbbed. I stopped thinking about R and just enjoyed getting myself off. My knees fell wide and I let my finger slip under the triangle of panty fabric. My finger traced those familiar folds, and dipped into the wetness over and over. I knew I could cum right then, but what fun would that be? That’s when I remembered R. I opened my eyes and he was sitting on the edge of the bed, his shyness was gone. He was rapidly wanking a thick stocky cock and staring at my disappearing fingers.

He squirmed and struggled. His good upbringing made him uncomfortable with asking for what he wanted. I was not going to let that stop me. I had already committed to breaking him out of his sexual repression. I had to assist. “Say it R… Say the word. Say… P U S S Y. “

He nodded and licked his lips. His hand started moving faster up and down on the shaft as he blurted the word “Pussy!” He was wanking so quickly that his hand was a blur. I was impressed with the girth of his cock. And his staying power.

I wiggled in the chair, working at pulling my thong down my thighs. I left it on both calves then laid back and worked the thong down my calves and onto my feet. Then I see-sawed my feet, stretching the fabric between them so that the panties obscured his view of my crotch. I let the stretching material snap off one foot so the panties dangled. He moaned as they made that sudden snap. I folded my knee back and with the thong hanging off one toe I let the tiny string that was once over my hip tickle my clit at the same moment I let my right knee fall open. My pussy played pee-a-boo behind the panties. I grabbed them off my toe and dropped them onto my crotch, completely hiding my pussy once more. I loved teasing him. He was incredibly turned on.

He had slipped onto the floor in front of where I sat. He was crouched like a child, tugging on his cock and his face was desperate.

“I will R, I will show you my pussy, but you have to agree to stop touching yourself… ok?”

He instantly stopped. He leaned back on his heels and his cock curved impressibly up and forward.

I hooked the panties on my toe once more and reached my foot forward toward where he squatted then let them drop so that before they landed on the floor at his feet, they brushed against his cock. His dick strained forward.

His eyes were wide as he sat staring into my pussy. My meaty lips were even more swollen and the pinkness was coated with glistening juices. He was mesmerized. “ I love it Mia. It’s soooo beautiful…..”

With his face inches from my aroused pussy I flexed and tighten it, letting him see it wink and pout. “Please Mia” he begged, “do that again.” The second time my pouty lips pushed out in a kiss toward his rapt face he groaned and his cock flexed and began cuming. He wasn’t even touching himself.

R’s interest in me is mutual masturbation. It’s grown beyond hotel rendezvous’. R loves my pussy and is totally dedicated. He loved everything about it, but especially when it is aroused. His favorite thing is when I arrive for our dates soon after I have fucked another man. He loves the look of my well fucked pussy. I have allowed him to taste my juices off my own fingers and he knows the smell of me well. He has a growing collection of Mia panties he keeps locked away somewhere in his private life. He enjoys suckling on my tits while he jerks off too.

Some other time I am going to have to write about how he reacted to the first time I made my pussy squirt for him…. hehehe

Made me very exited and wet

Fantastic! U really should publish these stories in a book,I certainly would buy it!