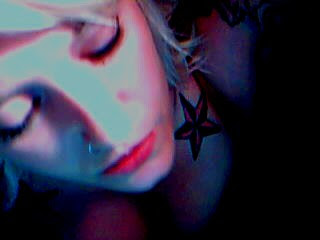 I have run into a bit of health issues and will be unavailable on Niteflirt for a while. I will miss you terribly (yes you) but recovery from surgery may take up to a month. In the meantime you can send me messages through this blog as a comment or if you have my IM address you can leave me a message there. I look forward to getting back to our play! xxoo mia
Posted by Mia at 10:30 PM

A story for your convalescence

The car he sent dropped her a few blocks from the hotel. Her heart jumped as she realized she would be walking the last few blocks. She had followed his instructions and wasn't dressed for walking in public. Not too many people walked the streets here and it was a few towns over from her town, but traffic piled up as drivers waiting in line to pay the fare for the tunnel. It was among the busiest streets in the state. She thought of all the people on her block who might be going into the big city on a Friday night. Or they could be at any of the last-chance-for-cheap-gas stations that lined the streets

She looked straight ahead and walked as quick as she could in her Mary Janes. She knew she had a few long blocks to the hotel. She tried not to think about anything, but it didn't work. As her heels clicked on the sidewalk, she thought about how he asked her to dress. He sent her a length of pink silk ribbon and a note that said, "For my pretty little girl." Taking that has her cue, her hair was tied into pigtails. The image made her cheeks flush. She thought about how she tied little pink bows to her white anklet socks and bit her lip. She knew one of those cars, probably more than one was watching this grown woman in her little girl get-up and she felt a sting of shame which made her pussy wet. The cool night air felt like voyeur's leer and her nipples poked through her school girl blouse.

Jesus, two more blocks. Her pussy felt like it was leaking. She wondered if she would get to the hotel before her pussy juice ran down her thighs below her tartan skirt. Hotel, who am I kidding. It's a sleazy motor lodge, last chance for action before New York City. She would have to get the key at the desk. She thought for a second about her neck, more specifically about how she glued the pink ribbon tight around her as choker. Perhaps she should take the off, it was a little too overt. And maybe, a little too tight, she started to feel lightheaded.

Thank you for the little tale... I liked the party where she felt shame walking down the street, I have been there!

....
The desk clerk gave her a lingering once over, but didn't say a word as he handed over the key.

On the bed was a single long-stemmed red rose, a note card and a blindfold. She noticed the bureau and the TV, were pushed up the window to make room for the chair that was placed at the foot of the bed. She read the card

Hands and knees.
Blindfold on.
Skirt folded up on your back.

I will be in shortly.
Enjoy the rose.

She lifted the rose to her nose, noting that the thorns had been left on. She looked around the very generic hotel room. She went to the bathroom to check her face. Everything was in place, the ribbons, her choker, her lipstick, but she looked and felt anxious. The blindfold made her more anxious because though they had played many times, she had never met him before.

The mattress was good and soft. She didn't know how long she had waited in position. It was probably just a few minutes, but that tingle in her pussy she felt walking on the avenue and grown into an insistent throb. She took some long yoga breaths. She had the feeling she was in for a long evening tease. She inhaled slowly in one nostril and exhaled slowly out of the other nostril. It worked for a while but every sound made her think the door was about to open. That made her think of her clit and how she wanted to rub it.

More time passed. Her panties were soaked. She thought that would please him. As a smile creep across her face, she heard the door open....

rathe than wade through a year of inbox messages at that other website to find your email address I thought I would leave a comment here. Get in touch with me re: the user ID# for a name and the sire locked blog.

Well fell better and I hope you recover quickly

Mia, I'm worried about you , are you OK?

Miss you. On phone. Your stories here. Hope you are good.