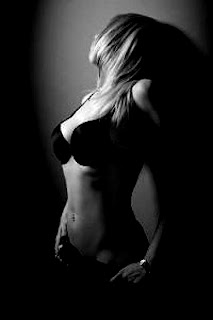 He was waiting for his wife to come out of the coffee shop. He was annoyed.  She had called minutes after he got home from work.  He had just changed out of his suit and was pouring a glass of wine when the phone rang.  Another late meeting.  She seemed to have meeting or conferences to attend every weekend now.  He was starting to worry a little.  In so many ways she was the perfect wife, she was always so agreeable, a great hostess for business meetings, she looked great.  In fact as she aged she became more and more attractive.  He had thoughts so but it was confirmed last year at a holiday party when more then one drunken friend came up and commented about how good she looked.
Tonight he was annoyed.  He sat in the car outside the shop and waited.  He glanced at his watch.  Her test said twenty more minutes.  He didn't understand why she hadn't driven her own car down here...or maybe he did.  He noticed a seedy looking bar across the street, a row of Harley's lined up out front. Leaning against the wall was a woman who was clearly "working".  She was a tall and willowy black girl, wearing short shorts and a red tube top and impossibly high platform heels.  He saw her talking to a guy.  Were they negotiating?  Was this man preparing to pick a hole?  Was she telling him her price for a blow job...
He looked at the woman's plump mouth and imagined her sucking his cock.  His dick instantly hardened.  His dick always did that, it never took much and he was ready to go.  He entertained the thought of having her suck his dick while he was waiting.  He closed his eyes and tugged at his cock through his pants.  A sound made him open his eyes and look over, the tall black hooker was gone and another hooker and two guys were walking out of the bar and toward the corner of the building.  This girl has a full ripe body, with a thick ass and round heavy tits.  His dick throbbed at the sight of this woman. She was his "type".  She tossed her long straight blonde hair over one shoulder and smiled her whore red mouth at the "johns".  He imagined this petite bombshell on her knees in front of him as he unzipped his pants and began stroking in earnest.  Despite his best intentions he was always so attracted to dirty women.
The bombshell took one guy around the corner and stood underneath a street light and dropped to her knees.  The second guy stood "look out".   I think she likes an audience, it's like she is on stage underneath that light.  She positioned herself between the guys feet and raised up her miniskirt so that her bald, pantiless crotch was on display.  Then she licked her lips and glanced out to the street and smiled.  Did she just look right at me?