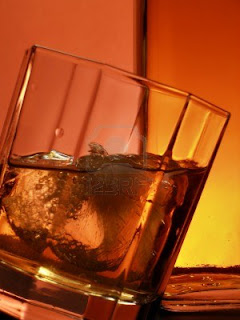 He didn’t want to look but felt compelled to.  He sat at the bar in the basement of the house and glanced over to the couch.  He stared for a few seconds then turned back to his cocktail on the bar.  He slightly shook his head looking into the amber liquid then he abruptly turned back the action on the leather couch. Jennifer was between them.  The woman, the boss’s wife, had her mouth on Jennifer’s tit and was licking and sucking while the three of them held a conversation laughing.  He didn’t know what they were talking about; the music was loud enough that most of their words were drowned out.  He looked into the glass again and watched the ice cubes swirl in a clockwise direction.
He and Jennifer had only been married four months.  The wedding was only two months after he was hired. The boss and his wife attended the conservative ceremony.  He and Jennifer had lived in this city for eight months while he was searching for a job. It was hard times for them both and Jennifer had turned back to stripping like she had in college.  He hated that, but she loved the attention and gifts the men gave her. Now here she was on the couch between his boss and the boss’s wife, getting all the attention she loved.
He shifted on the barstool and looked back.  The boss’s wife was between Jennifer’s legs licking her pussy.  Jennifer had her head lying back over the back of the couch, her eyes were closed.  His boss looked at him and grinning and then stood up in front of the two women and began unbutton his jeans.  He watched as his boss pulled a rock hard cock from his pants while staring at his young beautiful wife.  As much as he hated to admit it, as he sat there and watched his wife get molested he was also rock hard.
When he turned back again, the boss had one foot on the leather cushion of the couch and was leaning over Jennifer and she was hungrily sucking his cock while the wife continued eating her pussy.  Jennifer was a great cock sucker.  She was vigorous and ravenous and he watched as her head bobbed and her cheeks hollowed.  Her eyes were still closed.  He realized he was massaging his hard- on through his jeans and he stare at his slutty young wife.  He watched as his boss put his hand on the back of her head and pushed his dick deeper in her mouth and he saw how Jennifer, mouth stuffed, opened and let her tongue slip out and reach toward the bosses balls.
Jennifer was now on her hands and knees on the floor and had her mouth buried in the boss’s wife’s crotch.   His boss was fucking her doggie style while the boss’s wife ground her pussy into Jennifer’s face.  He was leaning forward toward the scene; he could no longer look away.  He was energetically jerking his cock, rocking on the bar stool as he matched the thrusting of his boss into his new wife’s tight wet pussy.  Suddenly he loudly grunted and a thick gob of cum shot out of his cock to land on the brown leather of the couch cushion.  All three of them looked up from their fucking and saw him empty the contents of his balls onto the floor.