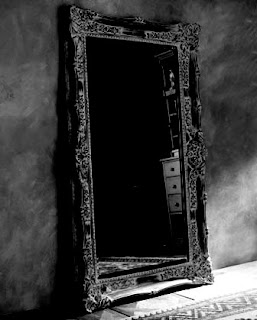 She knew at her age it would seem ridiculous to some but she didn't care.  She didn't tell anyone and didn't share it with anyone. This ritual was her dirty little secret.  He boyfriend didn't even know.  That fact drove her crazy, she often thought about him while she did it.  She thought about how much more fun it would be if she could share it with someone.  But she wasn't ready for the possibility of him rejecting this important part of herself.
She reached up and tightened the pony tail holder on one side, then did the other.  She already had slipped the satiny babydoll nighty over her head.  She looked at herself in the mirror.  Seeing herself like this was all she needed and her mind was racing down that path.  She sat on the hardwood floor and opened her legs so that the crotch of her white cotton panties could be seen in the large antique mirror that leaned against the wall.  She bit her lip and scooted closer toward the big mirror.  Her nightgown was light pink with white lace trim and it strained obscenely across her front with her large round breasts stretching the fabric so every bump of her areola was outlined. The nightgown was not made for a person with fully developed breasts, it was much too small.  That is why it was so perfect.   She slipped her hands under the heavy meat of her tits and weighed them in her palms then began caressing them, the whole time looking at her pigtailed image in the mirror.  She opened her legs wider and looked at the way her flesh down there filled the cotton fabric, making the crotch of the panties bulge.  She let her fingertips press into the bulgy meatiness.  Finally she stood up and looked at herself and smiled a sweet smile in the mirror before pushing out her lips and making the common so called sexy duck face.  She started posing in front of the mirror in poses like she had seen in the old Playboy magazines; playing with her ripe body and showing off for an unseen audience. She bent over and let the light pink fabric rise over her full ripe ass cheeks hidden behind that white cotton fabric. She reached back and pinched the fabric to make the full back into a thong and showed off her ass in the reflection.  She put one hand on the foot board of the bed and arched her back looking back over her shoulder at herself.  She was trying hard to look like those beautiful ladies in her father’s magazines.
She slipped off her panties and posed some more, with each lavicious grin she found her heart rate increasing and her breath becoming ragged.  Finally she opened the box she kept under the bed and sat on the floor in front of the mirror once more.  She laid out a collection of dildos in increasing sizes.  She bit her lip and looked at herself in the mirror and then glanced down at all the rubber dicks.  She was burning hot and felt herself tightening, wettening and readying.  She pulled her knees up and let her legs fall wide so her pretty pink hole was open in the mirror.  She moved closer so she could see inside when she spread the folds open.  She leaned back and raised her legs and looked at her asshole too.  She opened her cheeks and winked her hole, imagining showing off for her viewers.   Finally she reached for one slim rubber dick and watched herself lick and suck it, while making sexy moaning noises.  She opened her eyes and looked directly into the mirror and spoke “ daddy, I want you to push it in.”  She took the dildo and began pressing it into her drenched pussy.  She forced herself to hold back, she knew at she could come anytime now.  She always felt a sense of accomplishment if she could hold off cumming until she pushed the 2nd larger dildo into her wetness.  She brought the slimy cock to her mouth and licked it up and down the shaft, lapping on it like it was a lollipop smiling sweetly at her reflection.
She grabbed the next, larger dildo and again brought it to her lips and licked and sucked it.  She said to no one “like this Daddy?”  Her heat grew as she watched herself, legs spread and her pink hole oozing while she moaned and sucked.  Finally she said ‘please daddy, I have been such a good girl, please put it inside my slutty hole, please daddy!”  She grinning proudly and as she was bringing the cock to her pussy and beginning to insert it she heard a noise.  She turned to look over her shoulder and saw her boyfriend standing in the doorway.  He had his dick out of his pants and was stroking it.  His jaw was set firmly and his eyes burned with lust as he stared at her.  Suddenly he took three big strides toward her and grabbed her by the pigtail and lifted her to her feet and shoved her down face first onto the bed.  He groaned as he shoved his throbbing dick into her soaking wet hole.  He pistoned in and out, humping her like a dog, his body leaning over her light pink nightgown and his breath coming out in grunts.  He felt her pussy tighten around him and he knew she was cumming but he did not slow.  He lasted only five more hard strokes and exploded deep inside her then plopped his body onto the bed next to her with his dick still buried and pulsating. She felt his breath on her neck and then heard him say “Daddy loves his slutty girl.”

that was awesome thank you