From the very beginning she was clear in what she wanted and expected.  She was an independent woman and had left behind societies expectations 15 years earlier when she signed the divorce papers.  She went into the traditional relationship with a positive hopeful attitude but within months the new husband demonstrated a desire to control her through a mixture of intimidation and other traditions of marriage.  She planned a perfect and careful extradition of the financial and emotional bonds and found herself once again free within a year.  She watched her girlfriends struggle with all the limits on their freedoms and their easy way of compromising their dreams for their partners.  She didn't judge them harshly for this, she felt sad for them and they all admired her autonomy.
So when she met Johnny she laid it all on the table, as she always did, with every man she was interested in dating.  He was much more accepting then most of the men she met.  She was almost eager to accept her terms.  This of course made her wary because desperate men were not attractive to her in the least.  She kept him at arms length for months.  He did not give up or was he needy and clingy.  He announced his intentions but gave her space.  They grew close, like friends, both of them sharing parts of their lives in conversations.  He did not hold back. Even though she was someone aloof about him becoming her lover, he was the opposite, proclaiming his love and passion in grand romantic gestures.  She remained distant but amused by his declarations of love.  Eventually she told him she would give him a chance, just one date to see if it might work out.  He was overjoyed.  Finally, she invited him over.

Johnny entered her front door and was greeted by her.  She was dressed in a tight black skirt and fishnets and black fuck me pumps.  Her crisp white blouse stretched across her ample breasts and edges of a light pink lace bra peeked out from the edge of her cleavage.  She had her long blonde hair in soft loose curls down her shoulders.  Johnny felt embarrassed because he was dressed causally in jeans and a tee-shirt.  He did not know what to expect from this date and chose to go with the unassuming casual wear.  He started to make excuses about his clothing and she approached him and brushed her fingertip along his lips effectively hushing him.  He stood there quiet and let the full effect of what she was wearing wash over him.  Her round softness was both concealed and revealed in her overly tight skirt.  The blouse, in its simplicity, screamed sexuality in the way it fit her.  Her strong legs, behind the fishnets caressed her muscular frame and when his eyes traveled down and followed her petite feet disappearing into the patent leather of her shoes he almost gasped out loud.  She was the most lovely female creature he had ever seen. It wasn't great traditional beauty but the total package of who he knew and the overwhelming confidence that radiated from her body. He felt light-headed and about to burst with joy.
She finally spoke "Your clothing doesn't matter because I don't require it."
He was completely sober but felt as though he had been drinking.
"This is how I want it to be between us, and it will never change.  You will not be my boyfriend in the traditional sense ever.  I don't want to hear you talk like that is a goal of yours.  You must be satisfied with what I give you and expect nothing more.  Know that I am doing my best to consider your desires but really I only want one thing from you.  Surrender."
He reached back and gripped the arm rest of the couch.  His hands were hot and his mind was swimming.  He had a painfully hard swelling in his pants, pinched by his tight jeans.  He braced himself and closed his mouth.  Had he been panting?
She lowered her voice to a deep quiet almost rumble. "This is all I want, from you."
He was not the surrendering type.  He was quite the opposite.  He was in control. In his work situation, in his family, in his business dealings.  He was the rock that everyone leaned on and counted on to make things happen. This surrender she is asking for was not something he had considered before.  Or was it? Wasn't that what their relationship had always been, the phone calls were on her terms, the skyping was on her terms, the friendship was on her terms. He had never once been allowed to determine the actions within this relationship.  He looked at her once again and he knew immediately what he wanted.
He took a deep breath, steadied himself and found his voice.  With a bold and expectant tone he said "Yes.  This is what I have always wanted from you, I want to surrender it all. Everything is now yours."

Her usually somber face turned light and bright.  Her happiness shone through and was contagious.  Johnny also got a wide smile on his face and finally she said "well... Good!" and turned to the corner of the room where there was a bar.  She opened a wine bottle and grabbed two glasses when Johnny came forward and said, "allow me?"  She stepped away and sat on the sofa and he brought her a glass of ruby wine.  She toasted "to us" and he said "to you" and she agreed "yes to me!".  He slipped to the floor at her feet and they gazed at each other as they sipped and finally she said "lets play!"  She slipped back into the sofa cushion and crossed her legs, her patent pump dangling off her toe. "You have been sporting that hard on for quite a while now, so we might as well start where we always will.  Johnny, when your with me, unless I say otherwise, I want you completely naked. I have emptied a drawer in the bureau in the hallway for you.  You can put your car keys, wallet, shoes and clothes in there every time you visit.  Please do this before greeting me.  I will give you a key to the door so if i require you to arrive at whatever hour, you can come in without disturbing me.  You will never arrive without my request."  He nodded his head and stood up and left the room.  When he returned completely naked, she had not moved but her glass was empty.  He went to the bar to grab the bottle and leaned forward smiling at her while refilling her glass.  She uncrossed her legs and placed one on the cushion beside her, letting her knees open and giving him a view up the inside of her thighs, along the fishnets stockings and the dark crevice between her legs.  His rock hard cock flexed in appreciation.
Her voice broke his fascination with the space between her thighs.  "You're well appointed." She said as she glanced at his throbbing cock.  "I hope" she continued "its always this attentive."  She raised and eye brow.
"I can assure you, Mia, this is not a one time thing.  I think you are the most lovely creature that walked the earth and my enchantment with you will not diminish.  You are everything I want in this world. I want to surrender to you."
She smiled and reached out for his hand and guided him to his knees at her feet, "Very good, then how about you make me cum." 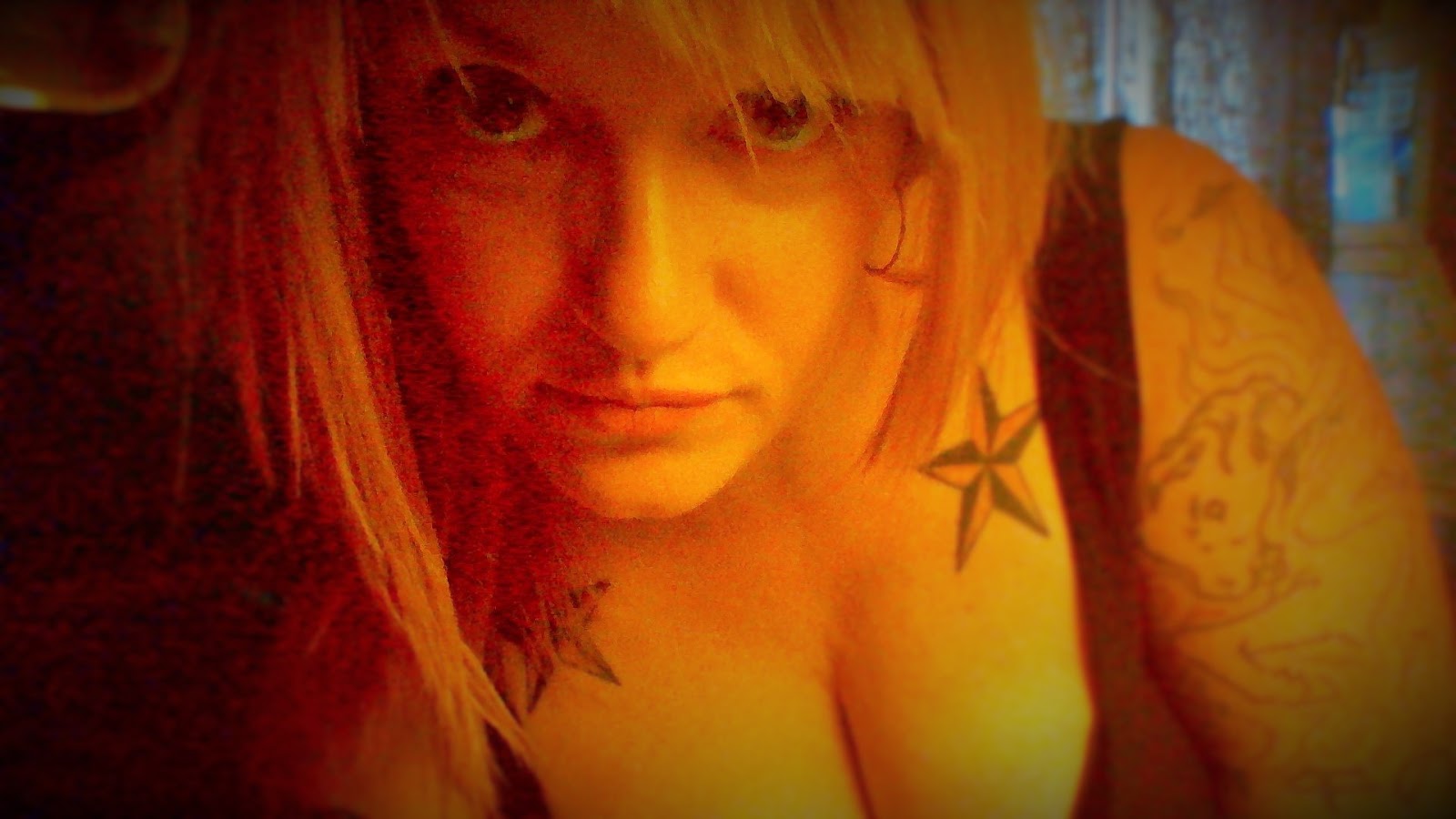