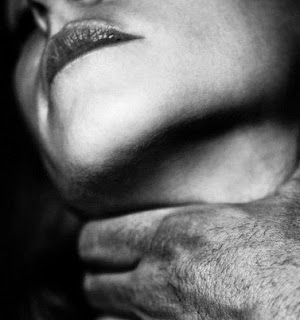 She sat with her feet curled under her ass on the leather sofa.  She had on a tank top and panties.  In the large leather recliner he was watching Anthony Bourdain talk about eating snakes in Indonesia.  She had no interest in seeing that.  She had her laptop on her lap and was scrolling through recent messages.  She giggled at one then kept reading. A notification sound pinged and she clicked to read the instant message.  She laughed heartily this time and her fingers began clicking on the keyboard.  This back and forth, ping, laugh, clicking went on a half a dozen times before he clicked the pause button on the remote and turned to look at her.

His chin lowered and he glared, she did not look up but continued to type. Finally he cleared his throat then asked “What is so amusing over there?” His voice was humorless.  Guiltily she looked up, suddenly realizing he had paused the culinary adventure he was so raptly engrossed in minutes before.  “Oh sorry” she said, “It’s one of my boys.”  He groaned.
“Subbies?”  he questioned. She nodded, her fingers frozen above the keyboard.
“I don’t get it” He replied shaking his head.
“No” she said, you wouldn’t.”
Their eyes were frozen on each other for a second.  Then he asked “What is it he wants?”
Before answering she perked up, shifting her body. He noted her enthusiasm for the topic as she began replying, “There are two in my IM box now, one, Steve…”
He interrupted, “Ew, I don’t want to know their names…”Her computer kept pinging with more messages.
“Ok” she began again.  “This one is into feet.  He is asking for a session where he can massage and jack off onto my pretty toes.
He shook his head before saying “Your feet are lovely, but Geez!  What about the other?”
She said one word, “Sissy”. Her computer pinged twice in a row. He face melted into disgust then he shook his head.  “And they know you’re a subbie slut?”
She nodded her head in affirmation.  “They love that I am a slut.”
He looked at her curled up on his couch, her nipples hard under the thin fabric of her tank top. He thought about her sluttiness, the way she embraced it, even the pride in which she declared it. He thought about her willingness to please and serve, her ability to milk the cum from his balls.  He was hard.
He stood up and unzipped his jeans letting them fall to the floor.  He walked over the back of the couch where she sat and put his hand on her shoulder. “Invite them” he ordered and continued “but turn your fucking notifications off”.
Her laptop screen opened for cam viewing.  His fingers wrapped around her throat as she turned to head toward his cock.  She began worshipping his cock as the viewing windows began opening. He ordered her eyes up.  He was pumping in and out of her wet throat making her gag then pulling out to feed her his balls and twisting her head to press her mouth to his ass then returning to pumping her throat. She struggled but maintained eye contact except for during the deep gagging.  She was rather good at blowjobs and he didn’t last long.
When he was ready to cum he pushed her face close to the camera and let his long ropey jets of cum splatter her face and neck and onto her lips and outstretched tongue. Then he said “Leave it”.


She wiped her hands on her tank top and began once again to click away on the keyboard.
Posted by Unknown at 1:54 PM 2 comments: