At home her hunger was insatiable and her husband tried to satisfy her desires.  Sometimes felt bad for him because as he worked from home, her demands cut into his work time and he ended up having to work late into the night.  Every morning she woke up wet with need and turned to her husband and gently guided his head under the covers. While she got ready for work, sliding on stockings, heels tight pencil skirts and clingy blouses made her feel even more need and she called him away from his desk.  Some days she begged for him to deliver her lunch at work, just so she could have lunch time release.  After dinner and a glass of wine she ached to be filled and seduced him at the dining room table. He had been taking Viagra like a daily vitamin since she reached this sexual peak. 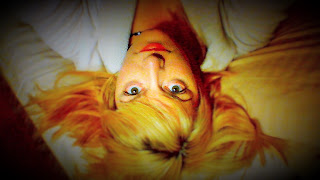 On their anniversary she brought home a dildo and asked her husband to facilitate double penetration. The cock was 10 inches and dark in skin tone.  She knelt, doggie style, in front of him and pushed her wide ass into the air. He noticed she had the red satin panties and bra he had bought her for the previous anniversary, He looked down at the most recent anniversary gift in his hand.  He was very hard. He pulled the panties down but left them bunched around her thighs. He knew she liked this feeling of being restricted by pulled down panties.  He thought about her getting fucked by a stranger in a public place, skirt up, and panties down, and he wondered if she was thinking the same thing. Her ass cheeks were alabaster and smooth and the crevice of her ass was a glorious landscape he ached to explore. He dragged on finger down her ass crack barely parting the fatty flesh. She arched and pushed against him.  She widened her stance and with her curved back, her thick cunt lips were visible and slightly parted.  He dragged his finger down lower and pressed into her folds and found her ready and damp. He dipped two fingers into her with little resistance.  He raised the black dildo and pressed its thick head to her slickness and began to push.  Her lips drew in and he found resistance.  Watching, so closely, her flesh stretch for another cock, rubber or not, made him ache.  His free hand clasped his shaft and began to slowly stroke himself. He pulled the dildo back and saw that her juices clung to the end of the rubber cock.  He repeated his movement, pushing the thick head into her slickness and it started to enter.  Her folds stretched around it, her skin taunt and she let out a guttural moan. He wanted her filled.  She wanted to be filled.  He pulled it out and back in until all ten inches had disappeared into her body.  His mouth was agape as he saw the dildo’s wrinkly balls pressed up against her swollen cunt.  He never remembered being this turned on.  She rocked pushing back, spurring him on.  She wanted it hard and fast. He began pistoning the dildo into her sopping hole as she was making grunting animal-like noises.  Her animal side had taken over.  He raised up on one foot and aimed his cock for her asshole.  He leaned his body over her thrashing body, pinning her to still her and pushed his hips into her, gliding his cock, wet with his own desire, into her snug cavity.  It squeezed around him, pinching his dick in a way that made his head spin.  He had never fucked such tightness.  She was both unyielding and completely accessible. She reached between her legs and grasped the base of the dildo and began rocking it in and out of her drenched hole.  She began her wail again and he felt her inside spasm and the rubber dick moving in the adjacent void.  Her tightening milked him and he emptied into her asshole at the moment that he felt a torrent of her juices erupt onto his thigh and foot planted onto the bed underneath her heaving body.

This became their standard husband and wife love making ritual.  During one occasion, he pulled the dildo out of her pussy with a wet sucking noise and buried his face into her swollen, hot, well fucked hole.  He feasted on the meaty flesh and tenderly kissed her raw lips, tasting his own juices as they dribbled down along her taint.  He discovered that their mingled flavors and her thick used cunt in his mouth instantly returned his desire and without thinking he came again, into the sheets as he humped his hips in the rhythm of his sucking mouth. She smiled at him. “I want it honey. I want it for real.”  He was spent but he looked up at her and he said “I want it too.”
Posted by Unknown at 6:22 PM

What a gift... for him and for us readers!