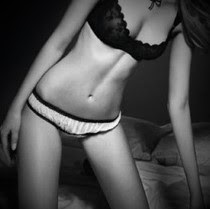 
Back at their house she was waiting for us fresh and pretty from the shower.  He and I were very drunk. I plopped down on the couch again and he slurringly told her to “go on, sit with her”.  She came and sat with me and we started kissing. I had been imagining a threesome with them for the last hour and was overripe with lust.  He watched from his swiveling chair as I guided her down on her back on the couch and raised her tee-shirt and kissed and nibbled her chest.  He drunkenly muttered “That’s hot baby” as I licked down her belly.  He knelt and began taking off her shoes then helping her wiggle out of her jeans. She had light pink panties with tiny flowers.  This whole scenario was blowing my mind.  I pulled her panties down off one hip bone and nibbled as she hungrily sighed. I slipped to my knees on the floor as she scooched her ass to the edge of the couch.  I pull her panties down her legs.  Her husband moved beside her on the couch and they kissed.  I parted her thighs and she whimpered against his mouth “Oh dadda.” She had sparse reddish pubic hair dusting her mound and a lean pink pussy that glistened ready for me.  I used my finger tip, and traced her flesh while I lightly tickled the edged of her lips until she lifted her hip and groaned for more.  She was looked down her body and stared into my face.  Her husband had removed her top and bra so she was naked. I loved the way her body looked so girlish and feminine.  I felt my insides do a leap at the sight of her.  With my eyes locked on hers I lowered my face and planted a kiss on her pussy. I glanced at her husband who was hypnotized by the sight of us before him.  His eyes were glassy with lust.  “So hot…” he trailed off.  I licked one long stroke from taint to clit then mumbled “I think she’s doing this ...” He nodded.