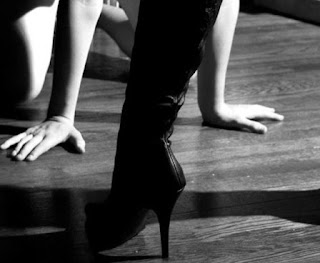 He is pathetic, Jane told her friend. I can’t stand being around him.  Yes, I hate him for cheating on me but I swear it’s even worse now that he is sorry about it, he acts so miserable and pathetic.  I don’t know what happened to the man I married.  This apologetic Michael is even worse than the cheating Michael.

Jane’s friend Missy listened while they sipped glasses of white wine.  Jane described the deteriorating state of her marriage.  Finally Jane paused and asked “What do I do?  This is the father of my kids, I can’t just dump him.  I mean, I believe the guy I feel in love with is somewhere inside this piece of shit.” Missy set down her wine glass and looked into Jane's face with understanding.  After many minutes and a deep sigh she said “He needs to be punished”.

A second bottle of wine was consumed as the women hatched a plan.  After a few google searches and a half dozen online purchases (that were covertly shipped to Missy’s home address) the women were ready.
**************************

Michael felt like shit. He fucked up big time. He was seduced by the thrill and the shallow ego stroke of an affair.  It was the worst mistake of his life.  He regretted it immediately, almost the minute after ejaculating on the woman’s face.  He thought, Jane won’t let me do that then abruptly… JANE?!? What have I done?!  He was riddled with guilt.  He figured he would just pretend it didn’t happen but he couldn’t stop thinking about his own stupidity.  He broke his sacred vow, he was a liar and a cheat and had became the type of guy he hated most, a hypocrite.  By the third day after his indiscretion he was sick with guilt. He hadn’t eaten or slept, and at night he tossed and turned next to his wife in their marital bed. Every time he closed his eyes the movie reel of his affair played in his head.  He had rationalized the foreplay, the flirting and teasing as harmless and without merit but then why was he deleting his ipad’s history constantly?  He never liked going to parties at Samuel’s house but he knew she would be there and he accepted the invitation, also knowing it was a weekend when Jane was at her mother’s house.  Then on the day of the party, while he showered, he shaved his balls, put on cologne and primped in front of the mirror.  He rarely drank but in preparation for the party he had poured himself a scotch.  A Scotch?! He never drank brown liquors.  But looking back he knew, he was summoning up liquid courage, he wanted to taste the forbidden fruit.  Before leaving for the party he was rock hard. He had to jerk off to relieve his nerves and while wanking like a zoo monkey he imagined the seductive vixen on her knees sucking him off, exactly like the way she had described in one her many texts. Harmless my ass, he thought.  I am a fucking idiot!

The day came, Jane headed over to Missy’s house early.  They worked on a basic script, they role played the scenarios, they unpacked their purchases and played with each of them to make sure they knew exactly how each worked. They had everything planned and both women plopped down on the couch.  “Are you sure about this?”  Missy asked Jane.  “Ab-soooo-lutely!” Jane replied, drawing out the syllables. “I am so sick of his shit, and honestly if this doesn’t fix things, nothing will!”  Jane smiled at Missy, “Seriously thank you, I mean it, fuck marriage counseling, and therapists, and priests who think they know it all!”

Missy walked over to the bar cart and picked up a bottle of Fireball “I’ll drink to that!” then both women took a chug directly from the bottle. “See you at nine.”

Jane said she wanted to go out that night.  Michael felt like she had been avoiding him for weeks so he was quite surprised and excited about Jane’s request for a night out.  He leaned toward her to give her a hug and she twisted away from him. Michael slumped his shoulders and spewed at Jane as she wandered down the hallway, “Ok fine, we can go out but I don’t know why you are asking me, you don’t want anything to do with me, you hate me!”  Jane rolled her eyes and headed to the shower, before disappearing through the doorway she called back “I definitely want to do something to you…”

Michael clinched jaw and sighed loudly throughout the car ride.  Jane drove, annoyed by his pitiful gestures.  As she pulled into Missy’s long driveway she detachedly commented “Missy’s invited us.”  Michael cocked his brow and frowned before asking “For dinner…?”  Jane didn’t answer him but instead jumped out of the car and started walking up to the house.  Michael lingered in the driveway  and when he finally entered and found the two women sitting together casually waiting for him.  Michael stood between the entry and the living room bewildered.  He noticed that Missy was wearing more makeup then usual and her hair was long and loose down her back. He also noticed that she was wearing an exceptionally sexy and tight red dress with very high heeled shiny black shoes.  Then he saw that his wife was wearing a similar dress but in emerald green and her shoes were also sexy.  Earlier Michael was too busy sulking and dawdling to have noticed how his wife had dressed.  Both the woman sat side by side on the couch.  Jane patted the area between them.  Michael’s stopped thinking with his brain, finally, she wants to have a threesome! His dick came to immediate attention.

Michael sat on the couch and put his hand on his wife’s thigh and glanced between the two women. His face was hungry with lust.  Jane took his hand in hers and started to pet his arm, Michael smiled lovingly at her and then Missy reached for his other hand which was sitting idly on his lap.  Both women glanced at each other and grinned.  Michael’s pants tightened in anticipation.  Out of nowhere Jane was holding handcuffs and a second later Michael’s wrists were locked up tight.  Before he was even able to formulate the question Missy was on the floor pulling a rope out from under the couch and wrapping it around his ankles.  Michael was not quite able to fathom this situation, he glanced down at his feet and at his hands then at his wife, as she sat on the edge of the cushion watching her friend.  Jane had  a hopeful and blissful smirk on her face.  Michael thought to himself, she is glowing, she looks so beautiful.  Missy finished securing his legs and both woman rose and stood, looking at Michael with their hands on their hips.  Michael squirmed slightly, his jeans were now pinching his substantial erection. The women rolled their eyes and exchanged knowing glances, they had spotted Michaels bulge and growing wet spot.

At the mention of his cheating, Michael bowed his head.  When Jane finished he looked up at her with pleading eyes.  “I don’t understand Jane, but I am so sorry and I will do anything you say.  I am a pig and you deserve better. I regret it every minute of every…”

“Shut UP!” Jane screamed. “I am so fucking sick of hearing this shit from you. Your constant apologies are not making me feel better! I want to feel better!  Missy helped me see just what I need. I need to punish you, hurt you, humiliate you, debase you, betray you… I want you to feel what I felt … what I FEEL!”

The room was suddenly silent.  Jane she stomped out of the room fuming.  Missy and Michael could hear her open a cabinet and start filling a glass.

“Look Michael” Missy spoke in a soft and soothing voice. “Jane deserve better, you didn’t ask her permission when you choose to lie and cheat. So tonight, we aren’t asking for your permission either.” Missy lowered her voice to a whisper and leaned into Michael’s ear “You have to pay.” With that Missy gagged Michael with a scarf.

Jane reentered, with brown liquid and ice cubes clinking in her glass.  She sipped and watched as Missy cut away her husband’s clothing.  His wide eyes darted from his wife’s face to Missy kneeling beside him as she worked at removing his pants.  Each time she sawed the scissors on the thick denim fabric her breasts jiggled beneath the front of her tight dress.  Jane grabbed Michael’s jaw and twisted his face toward hers, “You’re like a fucking dog, you think with your fucking dick!  What the hell is the matter with you, I am RIGHT HERE and you’re looking at Missy’s tits while your cock leaks!” Michael looked down, partially out of deference but also to see what his betraying dick had done.  Sure enough, he saw a puddle of ooze that had dribbled onto his thigh. Suddenly his head was jerked back and Jane was behind him with something around his throat. It was cold and metal and grew increasingly tight until he coughed a choke.  Missy spoke “Jane, I believe we have his attention now.”

Missy held the metal choke collar tight, Michael soon realized as long as he didn’t fight it, he had enough space to breathe.  Jane moved around the room, Michael could only catch glimpses of her, out of his periphery.  Missy looked down into Michael’s troubled face then she glanced down at his crotch “The fucking pig still has a hard-on!” Missy laughed deviously “But not for long!”

Jane ordered Michael to roll over with his knees on the hardwood floor and his chest on the surface of the couch cushion.  He watched as both women put on black medical gloves.  Jane ordered him to put his cuffed wrists between his legs underneath him.  He heard the women whispering.  He couldn’t help it, being at their mercy was hot, and his dick was pinched underneath him but continued to leak. He tried to shift his hips ease the pinch.  Missy noticed and asked him if he was humping her couch and both woman laughed.  Michael whimpered.  Missy said she would help him out with that and reach between his legs from behind and gripped his dick and balls and started tugging them back between his legs. His whimpering turned to whining.  “Told ya.”  Jane said.  Missy tightened her grip on his balls.  Missy grabbed something from the cardboard box and showed it to Michael.  Fear widened his eyes. It was a cock and ball harness.

Michael was unsure about how much time had passed but his ass was burning hot.  The women had been taking turns spanking him.  His cock and balls were in the pinching harness and attached to the wrist cuffs which were attached to the rope around his ankles.  Trussed up was the phrase Michael kept thinking. He was miserable. Missy taught Jane about how to rub the skin first then to give gentle spanks then how to build the intensity. She taught her to vary the sensation by giving  then light caresses followed by hard spanks.  She also showed her how the reaction received varied depending on whether the blow landed on the cheek flesh or the thigh flesh.  And how to use not just her bare hand but the crop and the paddle.  Jane was happier then she had been in weeks, maybe years. She was enjoying herself.  Michael wasn’t whining much anymore.  Missy and Jane decided that Michael was handling his punishment just fine and they could proceed…